In early February, the AAOCS co-hosted the 2020 World Congress on Oils and Fats & ISF Lectureship Series with the Australian Oilseeds Federation (AOF) and the Australian Olive Association (AOA).  This event was held at the International Convention Centre in Darling Harbour, Sydney.

Despite the challenges with fires, floods and initial phases of COVID-19, it was a successful and insightful meeting. We had 275 delegates and 170 presentations covering a wide variety of topics in the fats and oils science/industry (See Figure 1 for delegate breakdown). The AAOCS hosted two preconference workshops (3rd AAOCS Infant Nutrition workshop & AAOCS Mediterranean Diet workshop). Both of these were wonderful events and there are updates later in the newsletter.
I want to personally thank Professor Andy Sinclair, who gave a fantastic talk on DHA in the infant nutrition session, his first since his debilitating stroke. It is good to see that Andy is still as sharp as ever and a fount of knowledge to tap into. 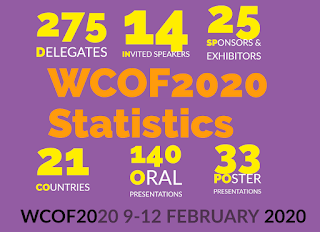 There were many high-quality presentations throughout the event: it was a great to have Richard Bazinet from the University of Toronto (Canada) present his work on how DHA enters the brain. He is the current president of the International Society for the Study of Fatty Acids and Lipids (ISSFAL) and is leading the world in his research on brain lipid metabolism (a very hard thing to measure).
It was also wonderful to see the current president of the AOCS Professor Eric Decker (University of Massachusetts, USA) and his work on characterising the mechanisms of lipid oxidation, antioxidant protection of foods and the health implications of bioactive lipids. One of the areas that industry is really interested in is the emergence of new contaminates such as 3-MCPD, phthalates and mineral oil. It was a privilege to have the world leaders in the analysis of these in our country with Jan Kuhlmann, SGS Multilab Hamburg (Germany), Bertrand Matthäus Max Rubner-Institut (Germany) and Torben Kuechler, Eurofins (Germany) leading an interesting session on these.

The Australasian Section of the American Oil Chemists’ Society (AAOCS) Infant Nutrition Workshop is one of the few opportunities for a meeting focusing exclusively on lipid nutrition. It brings together key nutritionists, nutrition-related researchers and manufacturers for robust discussion and to examine possible collaborations.

The third annual workshop held during the World Congress on Oils and Fats in Sydney in February highlighted the most recent research in this field. Session topics covered both conventional and emerging topics, from prenatal nutrition to infancy and early life nutrition. The workshop culminated in a major discussion around guiding infant nutrition-related research in the future, infant formula structure based on human milk and regulations.
Professor Maria Makrides from the South Australian Health and Medical Research Institute (SAHMRI) presented data on omega-3 fats in prenatal nutrition. She highlighted that women with singleton pregnancies and a low omega-3 status (less than 4.1% of total fatty acids in whole blood) in early pregnancy are at higher risk of early preterm birth and most likely to benefit from omega-3 supplementation to reduce this risk.

Infants have the greatest need for docosahexaenoic acid (DHA). Professor Andrew Sinclair from Monash University stated that dietary omega-3 deficiency results in changes in learning, coping with stress, behavioural changes and responses in visual function. Also, DHA is an essential fatty acid for optimal neuronal function. DHA is transferred to infants through the placenta, and later through breast milk. Therefore, it is essential that mothers have sufficient DHA in their diets. For mothers who do not eat enough oily fish such as salmon, trout and tuna every day, high DHA fish oil supplements are necessary. For infants born from mothers with a low level of omega-3 during pregnancy, DHA-enriched infant formula is suggested, Nu-Mega’s Dr. Ghasemi Fard said.
However, based on the recent data published by Professor Makrides, supplementing women with a baseline omega-3 status above 4.9% of total fatty acids in whole blood increased the occurrence of early preterm birth.

Professor Barbara Meyer from University of Wollongong talked about transport of DHA and arachidonic acid (AA) during pregnancy and postpartum. She stated that high-density lipoprotein (HDL) is the main lipoprotein that transports DHA and AA. Also, she mentioned that DHA is carried primarily in HDL, because HDL has important antioxidant properties that may protect DHA from oxidation in transit.

Professor Michael Skilton from University of Sydney mentioned that early childhood nutrition can maximize cardiovascular health; high intake of eicosapentaenoic acid (EPA) and DHA can decrease the prevalence of hypertension by 5%. Professor Trevor Mori from University of Western Australia also stated that both maternal and infancy studies highlighted the benefits of omega-3 fatty acids supplementation on heart rate and insulin resistance to children between 5 and 12 years old.
Jan Carey, CEO of the Infant Nutrition Council, mentioned that they promote optimal infant nutrition, by supporting the proper use of breast milk substitutes and toddler milk drinks. In her presentation, she also stated that the fat component in infant formula, which can contain fish oil, is set by regulations for providing energy to an infant as well as supporting an infant’s normal growth and development.

Dr. Lourdes Urban-Alandete from Nu-Mega Ingredients highlighted some challenges for industry to deliver high DHA-fortified food, beverages and supplements. These include manufacturers formulating DHA dosage levels beyond the current source, targeting higher DHA dosages per serve and the impact of processing conditions on oxidative/sensory qualities. She stated that DHA has become a mandatory ingredient in infant formula, and DHA fortification levels in food and beverages have significantly increased. As a result, demand for this ingredient is increasing.
Dr. Emmett Chua from Bunge Loders Croklaan and Dr. Kirill Lagutin from Callaghan Innovation discussed structured lipids in infant nutrition, and how the lipid composition in infant formula needs to be similar to human milk (especially in triglyceride composition).

Dr. Anders Henriksson from DuPont Nutrition and Biosciences discussed a unique range of oligosaccharides found in human milk. He explained that these oligosaccharides are highly bifidogenic and can promote a group of bifidobacterial that typically colonise infants. He also reported that consumption of Lactobacillus Rhamnosus during pregnancy and by babies after birth resulted in a reduction of about 50% of eczema prevalence.

Finally, Flavia Fayet-Moore, CEO of Nutrition Research Australia, discussed the importance of childcare and nurseries. Children in their initial 1000 days of life spend approximately five out of seven days in childcare, therefore more than half of their daily food intake comes from these facilities. This can have a huge influence on their eating habits. Key objectives need to be followed in these nurseries: fulfilling children’s micronutrient needs and providing a variety of vegetables, food and textures for them. Modifying a child’s diet by adding vegetables to every meal, increasing plant-based food and beverages, removing processed meats and adding whole grains as well as high fiber foods, can have long term positive effects on their diet.

A good diet is critical for health, and Mediterranean type diets and lower carbohydrates appear better than other diet types. It may be no surprise to lipid researchers to learn that there does not appear to be any benefit in avoiding fats, other than to limit overall calorie intake. Current fads around certain fats such as coconut oil are not supported by science.

Fasting has also become popular in recent years, but there are so many different types – time restricted feeding, intermittent fasting, 5:2, and so the list continues. Professor Samaras reminded us that fasting is a tradition in all major faiths. As a society, we have moved towards eating larger meals and more of them, whilst becoming less active. Professor Samaras dispelled common myths, telling us that breakfast is not the most important meal of the day, grazing throughout the day does not stimulate metabolism and six small meals are not the best way to eat. Instead, it is important to restrict calorie intake for important metabolic processes to occur and time restricted eating could be beneficial for health.

At the end of the day, energy burned must exceed energy consumed and a healthy, balanced diet is still the best choice.

The sooner we act, the lower the consequences of climate change will be, but drastic cuts are needed to meet the Paris Agreement target of limiting global warming to 1.5°C. Australia’s emissions come predominantly from energy and transport, but there is an urgent need to reduce emissions in all sectors.

Professor Cowie stated that bioenergy, using organic renewable materials (biomass) to produce energy, and other renewable energy sources will be important. Advanced biofuels will be needed to decarbonise transport (trucking, aviation and shipping). On top of this, active carbon dioxide removal from the atmosphere will be needed alongside reductions in emissions to meet targets.
Significant gains can be made through sustainable land management – climate change is contributing to land degradation, but by building soil organic matter we can capture carbon from the atmosphere whilst improving soil quality and reducing degradation.

Professor Cowie reported opportunities for oilseeds, both in increasing diversity in sustainable farming systems and in the development of biofuels to support energy system transformation.
Overall, climate change is a critical threat and urgent action is required across all sectors. Bioenergy, reforestation and biochar are an important part of the climate solution. Effective policy should simultaneously encourage climate change mitigation, climate change adaptation and sustainable land management.

He then moved to address the bigger problem of replacing crude oils used for fuels. Currently petroleum provides one third of all energy and accounts for 30% of anthropogenic carbon dioxide emissions. To what extent can this be replaced by bio-based (plant and algal) oils? There is a massive market, so how can we meet it, 1) without competing with food; 2) in a sustainable way; 3) at suitable scale; and 4) at a competitive price?

Dr. Green described how cutting-edge oil technology solutions can drive a solution. Increased plant oil production through increasing oil content in seeds and the production of oil in plant biomass. High oil biomass tobacco has already been produced and the technology is transferrable to other crops. Importantly, this would not be reliant on increased acreage.

Despite the challenges described by the three speakers, all were ultimately optimistic that we have the science and the tools to overcome these obstacles, but we must act now.