Memorial and Recognition of Ashok Patel, winner of the 2020 Timothy L. Mounts Award

AOCS was heartbroken to hear the news of Dr. Ashok Patel’s passing. Ashok was a member of the Society and its India Section. He had recently been invited to serve as a JAOCS Associate Editor and also served as session chair for a few AOCS annual meetings. His presence in the AOCS community and at AOCS meetings will be missed. 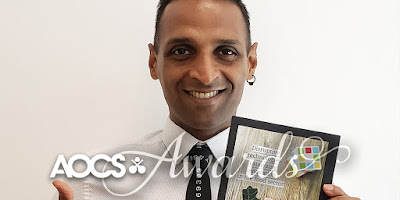 AOCS still wanted to recognize his accomplishments as a winner of the Edible Applications Technology Division’s 2020 Timothy L. Mounts Award, which recognizes research related to the science and technology of edible oils or derivatives in food products.

To help memorialize Ashok, we reached out to a few people who knew him well:

Prof. Patel was a unique individual. I had the pleasure to work with him on several recent projects related to the crystallization of lipids and fat mimetics. Ashok was an incredibly gifted researcher, combining a natural raw talent for research with limitless energy and a cheery and positive attitude. Everyone who met him could notice his energy, enthusiasm and keen mind. My exchanges with him were always fun, productive and energizing. I was looking forward to continuing to work with him in the years to come, but this tragedy has cut this short. Only 37, he had already made major contributions to the field of food colloids, fat mimetics and food materials science. His death is a major loss to the scientific community. He was also very popular among graduate students everywhere he went. He was an avid "Bollywood" aficionado – his dance sessions at the university and even when visiting research institutes abroad were legendary. He managed to make people of all races and walks of life join him in this fun style of dancing and expression. Asians, Europeans and North Americans joined him Bollywood dancing everywhere he went. This was the power of his enthusiasm for life. He will be sorely missed.

In many aspects, Ashok was an oxymoron himself: quiet and talkative, humble and brilliant, traditional and modern, light and strong. These contradictions made him a lovely person with an appealing and resilient personality. He only spent a short time at Iberian National Lab, less than we wanted, but he left us a deep fingerprint. Ashok was an outstanding and creative scientist and a better person. As a colleague, he was always willing to help, to smile at you to make easy, the rigorous experimental work. He was ambitious, trying to improve himself continuously –an excellent model for young PhD students. When he left INL, I foresaw for him a prosperous professional career, and he was accomplishing it. As in a Bollywood film, too early to say good-bye, dear Ashok.

I met Ashok in April 2014  in Amsterdam where he led a wonderful Bollywood dance show at the Gala Dinner of the “Food Structure and Functionality Forum” conference. What an impression he left on me then. It was only a short while later when we met again in the CEFOOD conference (May 2014). It was in the picturesque city of Ohrid, Macedonia, where we got to know one another and became fast friends.

Over the course of our friendship, I had the pleasure of writing a couple of letters of recommendation for his nomination to awards, and fondly remember being impressed by his soaring academic career and outstanding achievements.

Ashok is marked in memory by his typical enthusiasm, dedication and spark. This was no less true when, during the “Delivery of Functionality in Complex Food Systems” Conference (July 2019) in Porto, Portugal, Ashok was unanimously chosen by all of us in the steering committee, to lead the organization of the next DOF conference, to be hosted by the GTIIT.

These memories made it so difficult to hear the shocking news of his tragic death. While bittersweet, I was very pleased to learn that AOCS had the chance to inform him of his selection to receive the 2020 AOCS Timothy L. Mounts Award.

May his memory be blessed!!

AOCS passes along our deepest condolences and will work to make Dr. Ashok Patel’s memory last in the context of the Society and beyond.