Did you know that AOCS has a nutraceutical oils laboratory proficiency program?

The GOED-AOCS Nutraceutical Oils Laboratory Proficiency Program (LPP)  series allows laboratories associated with the producers of ingredient omega-3 oils and of finished products containing EPA and DHA, as well as third-party laboratories, to evaluate and demonstrate the proficiency of their testing abilities as part of the world's most extensive and respected collaborative proficiency testing program.

The GOED-AOCS Nutraceutical Oils series addresses several important quality parameters, such as peroxide value and anisidine value as readouts of oxidative quality, as well as acid value, in addition to the quantification of EPA, DHA and Total Omega-3 Fatty Acids. A variety in testing sample types ranging from refined fish oils from various fish species to highly concentrated forms of EPA and DHA as ethyl esters, allow the proficiency testing of a wide range of ingredient forms that are relevant to the nutraceutical market.

The GOED series has been a part of the AOCS proficiency program since 2008.  The series was initiated by the GOED organization (Global Organization for EPA and DHA Omega-3s). Originally the series was a test for the GOED Voluntary Monograph. It quickly became one of the more popular series.  Over the last few years other methods have been determined to be proficient in testing. Along with the Voluntary Monograph and AOCS method Ce -1i-07, USP 401, and Ph. Eur.2.4.29 are also acceptable for testing.

The GOED series is open for enrollment until August 20.

More information and enrollment in this LPP series. 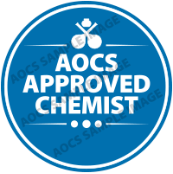 Analysts who participate in all quarters of the series can apply to be an Approved Chemist. Approval is earned by superior performance during the previous LPP year. Labs with Approved Chemists are featured in the AOCS Recommended Lab Directory.

Learn more and apply for the Approved Chemist Program.

If you have questions about this program, please contact Dawn Shepard, Laboratory Program Manager, AOCS, dawns@aocs.org.

The body of research into the benefits of EPA and DHA omega-3s has been growing for decades, to the point that there are now almost 4000 human clinical trials. Monitoring and understanding the nuances of the research is important for furthering omega-3 science and communicating broadly about omega-3 benefits. GOED, the Global Organization of EPA and DHA Omega-3s, has spent the last several years building a searchable clinical study database that curates and organizes all EPA and DHA studies in one place.

Join us on Wednesday, June 23, at 10:00 a.m. CDT (Chicago, USA; UTC-5)  for a live demo of this important clinical tool. We’ll showcase the tool’s ability to detail the number of positive, negative and neutral studies on a given topic as well as identify the key influencers and journals in the field, and we’ll also demonstrate what study findings have shown about a particular health outcome by demographic, dosage, and connected results.

Register now to see this tool in action and explore its many applications.

AOCS is proud to recognize the top performers of the Laboratory Proficiency Program (LPP). Congratulations to LPP Award winners at Viterra’s processing plant at Warden, USA. LPP Award Winners are among the top 10% of analysts in their field. We commend them for their dedication to conducting rigorous analyses in the lab.

“The LPP is an important tool in our business that confirms the soundness of our techniques in order to provide consistently accurate results,” says Heather Dahl, Quality Assurance Manager at Viterra. “It provides us with an opportunity to test a wide variety of oil types, and provides a high degree of confidence in our results with our auditors and customers.”
Learn more about the AOCS Laboratory Proficiency Program (LPP).