In August 2008 a new Laboratory Proficiency Program (LPP) series dealing with nutraceutical oils was initiated by the American Oil Chemists Society (AOCS) and the Global Organization for EPA and DHA Omega-3s (GOED). The organizations launched a new analytical testing series in the AOCS Laboratory Proficiency Program (LPP), the “GOED EPA and DHA Oil Monograph Series,” which is designed to assess the proficiency of labs in measuring the most common aspects of the GOED Voluntary Monograph for EPA and DHA omega-3 oils.

At that time the AOCS LPP offered three marine products series; fishmeal, marine oils and marine oil FAC.   The marine oil and marine oil FAC series were designed for the commodity marine oil markets and for the most part offered samples of crude fish oils from different origins. These series have been quite popular within the LPP. Because of the rapid growth and interest in the long chain omega-3 market at that time, there was interest expressed in expanding the LPP to include a series targeted for the Nutritional Oils industry. The GOED Voluntary Monograph for omega 3 marine oils set a new quality standard in the industry for long-chain omega-3 oils when it was established and was helping contribute to the continued growth of the market. The series tests acid value, peroxide value, p-anisidine value, Totox number (calculated), and EPA and DHA content reported as mg/g.  It does not include the dioxin, furan and dioxin like PCB tests from the Voluntary Monograph nor the heavy metals lead, arsenic, mercury and cadmium, since these tests are very specialized.  The GOED recommended method for determining EPA and DHA and the full GOED Voluntary Monograph can be downloaded at:  http://goedomega3.com/index.php/goed-monograph.

Currently there are six samples in the series, including a normal 30% EPA+DHA oil, a high DHA oil, a single cell oil, and 3 omega-3 TG concentrates, one of which might be in gelatin capsule form.

The AOCS utilizes participation in the LPP series as one of the requirements for the AOCS Approved Chemist Status. The GOED series is used by commercial laboratories as well as industry laboratories to improve their proficiency. Participation has included 30-40 laboratories from organizations in North and South America, Europe, and Asia. One of the positive outcomes from the program is that initially only the GOED Monograph Method for EPA and DHA was recommended.  However, over the years there has been an improvement in proficiency among various methods so that now the GOED Monograph Companion Guidance Document also includes the USP 401, Ph. Eur 2.4.29 and AOCS Ce1i-07 methods.

Registration for the AOCS GOED LPP series is open until August 20, 2018.  You can access the subscription forms at https://www.aocs.org/attain-lab-services/laboratory-proficiency-program-(lpp) 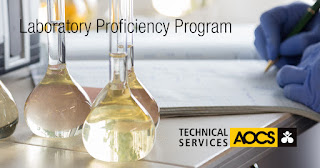