From our Students - University of Massachusetts Food Science Program

The AOCS Blog welcomes contributions from all of our readers. Tanushree Tokle, an AOCS Student Member, wrote this feature for the Student Common Interest Group (SCIG) Newsletter.

I am a Ph.D. candidate in the Department of Food Science at the University of Massachusetts Amherst. Founded in 1863 as a land-grant agricultural college, UMass Amherst is now the flagship campus of the state’s five-campus university system with an enrollment of 24,000 students and a national and international reputation for excellence. UMass Amherst sits on nearly 1,450 acres in the scenic Pioneer Valley of Western Massachusetts, 90 miles from Boston and 175 miles from New York City. The campus provides a rich cultural environment in a rural setting close to major urban centers.

Food science as a formal academic discipline began at UMass Amherst in 1918, and still remains one of the world's preeminent food science programs. The department was recently ranked the number one food science department for research in the U.S. by the National Academy of Sciences. It consists of 14 faculty members with research emphases in the four broad areas: Physical-Chemical Properties for Food Quality & Function, Food Safety, Foods for Health & Wellness, and Food Science Policy. I work with Dr. David Julian McClements in the Biopolymer & Colloids research group. Our research focus is on biopolymer and colloid-based encapsulation and delivery systems, and physicochemical basis of food component bioactivity and digestion. There are various kinds of delivery systems such as emulsions, solid-lipid nanoparticles, molecular complexes, self-assembly structures, etc. that can encapsulate, protect, and deliver lipophilic bioactive ingredients such as omega-3 fatty acids, carotenoids, and phytosterols. Consumption of these bioactive lipids can reduce the incidences of human diseases, such as heart disease, diabetes, and cancer.  The availability of effective delivery systems would therefore have major benefits in improving the health of the nation, as well as in reducing the large economic costs associated with these chronic diseases. 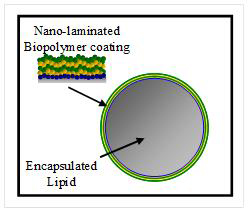 nano-laminated biopolymer coatings prepared by the electrostatic layer-by-layer method. This method consists of first preparing a primary emulsion stabilized by a charged biopolymer like a protein or polysaccharide.  A secondary image for Mar12 Stu CIG newsletter 3biopolymer with a charge opposite to that of the primary emulsifier is then added to the primary emulsion such that it electrostatically adsorbs on to the primary emulsifier forming a second layer over the lipid droplets, and thus, a secondary emulsion. Likewise, tertiary and quaternary emulsions can also be prepared by adding oppositely charged biopolymers over the second and third layers, respectively. It is hypothesized that these emulsions can be effective delivery systems that can protect and release the encapsulated bioactive components in the GI tract. In addition, the multiple layers over the lipid droplets can also delay their lipase digestibility. Hence, such systems can be used to develop functional foods that can induce satiety in humans and tackle obesity.

The primary biopolymer that we selected for my research is bovine lactoferrin (LF), which is a globular cationic protein having a high isoelectric point (~8.7). LF is also known to have various health benefits due to its antibacterial, antioxidant, and immune boosting properties. We studied the physicochemical properties of these emulsions under environmental stresses such as pH, heating, and ionic strength as food emulsions undergo such stresses either during or post processing, or within the GI tract. We found from this study that emulsion-based delivery systems with good physicochemical stability can be created using LF as an emulsifier.

We also investigated the behavior of secondary emulsions using cationic LF as the primary emulsifier and secondary anionic polysaccharides such as alginate and pectins, under environmental stresses and gastrointestinal conditions. This study showed that the stability and functional performance of oil-in-water emulsions containing lactoferrin-stabilized lipid droplets can be altered by adding anionic polysaccharides to form electrostatic interfacial complexes.  Covering LF-stabilized droplets with polysaccharide coatings led to the formation of emulsions that contained anionic droplets across a wide range of pH values (pH 3 to 9), which may have important implications for certain practical applications.  For example, cationic droplets may precipitate when added to systems containing anionic ingredients, or they may promote bitterness/astringency due to interactions with anionic mucin molecules in the mouth.  Thus the addition of anionic polysaccharides to LF-stabilized emulsions may be used to overcome these negative effects.  We also found that polysaccharide coatings improved the thermal stability of LF-stabilized emulsions.  On the other hand, polysaccharide coatings could promote droplet aggregation in the presence of high calcium levels and at certain pH values, which may limit their application in certain products.  High methoxyl pectin provided improved emulsion stability over a wider range of environmental stresses than either low methoxyl pectin or alginate.

Within the GI tract, LF and LF-pectin emulsions were stable to droplet aggregation in the stomach but aggregated in the small intestine, whereas LF-alginate emulsions aggregated in both the stomach and small intestine.  This difference in fate of the lipid droplets was interpreted in terms of the influence of the various dietary fibers on the colloidal interactions between the droplets.  The presence of the dietary fiber coatings around the lipid droplets had little influence on the rate or extent of lipid digestion.   This knowledge is important for the design of delivery systems for encapsulation of lipophilic bioactive ingredients.  For example, multilayer emulsion-based delivery systems can be designed to improve the physicochemical stability of lipids in food products, while still enabling the encapsulated components to be released in the GI tract.

Using the knowledge obtained from these studies, we are currently looking at different methods of multilayer emulsion preparation to compare the properties of the emulsions obtained and decide an optimum method. We are also studying and comparing the behavior and properties of secondary, tertiary, and quaternary emulsions prepared using electrostatic interactions between anionic LF and cationic beta-lactoglobulin at the oil-water interface. This research will have important applications in the food and beverage industry in terms of foods for health and wellness.

Thank you Tanushree for writing.

Did you know AOCS Membership for Students is free? (And free one-year membership after graduation, too!)

You can join as a student member here or contact Doreen Berning by email doreenb@aocs.org.


Would you like to share information about your research project or University? Please email your editors at tips@aocs.org.